On Tuesday, April 7 at 7 pm at the Dick DeWees Community & Senior Center, the Lompoc-Vandenberg Branch is bringing Carissa Phelps, author of “Runaway Girl” to Lompoc!  She will talk with the community about the problem of sex trafficking on the Central Coast.  She will give us numbers and statistics and talk to us about the resources we have in place and what resources are needed to deal with the “fastest growing crime in America.” Carissa will bring us up to date on legislation passed and pending and how to identify what is happening to our youth.

We want to fill the Dick DeWees Center to capacity and we need your help!!  Can you help us by forwarding the attached flyer to individuals and groups that you think should be in the audience on April 7?  Our goal is that everyone in Lompoc will know about this event and that at least 150 people will attend!!

Thanks for your help!

Many of you attended our April 7 event with Carissa Phelps, but you may not have seen this article from Noozhawk, which is a Santa Barbara newspaper.  The reporter did a good job of capturing Carissa’s presentation.  Below is the link to the article. 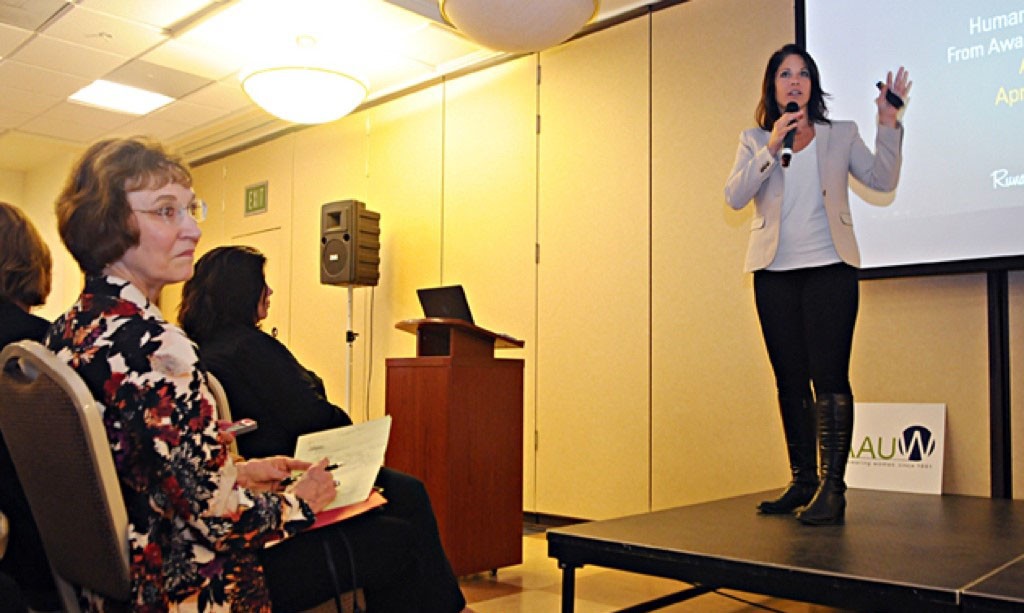 Carissa Phelps, right, speaks on Tuesday night in Lompoc about being a survivor of child human trafficking and what the community can do to prevent those types of crimes. (Lara Cooper / Noozhawk photo)

The survivor turned lawyer-advocate appears at an event in Lompoc to speak about what service providers can do to help children.

About 200 people packed into a room at the Dick DeWees Community Center in Lompoc on Tuesday night to hear about an insidious problem plaguing Santa Barbara County — that of human trafficking.

The crowd had gathered to hear from Carissa Phelps, a human trafficking survivor who has now founded her own organization that helps connect survivors of human trafficking with employment and career opportunities. That group, called Runaway Girl, also coordinates trainings and seminars on how communities can help victims of human trafficking, many of whom are children who are sexually abused and victimized.

Phelps appeared at the event, which was sponsored by the Lompoc-Vandenberg Branch of the American Association of University Women, and has written a powerful memoir about her own life story called Runaway Girl: Escaping Life on the Streets.

Her gut-wrenching story details an abusive home life in Coalinga, Calif., and how Phelps, as a 12-year-old runaway, found herself caught in a vicious cycle of sexual exploitation and abuse as she was trafficked as child by a brutal pimp. The book is a harrowing tale of how children can become victims in their own communities, and documents the cycle of juvenile hall, group homes and life on the streets that constitutes the reality for many runaways.

Phelps was eventually able to attend college, graduating with a law degree from UCLA as well as an MBA, and had dedicated her life to advocating for survivors.

Phelps spoke Tuesday and her talk was less about her powerful personal story outlined in her book and more on what community service providers can do to help children.

Many law enforcement officials, including officers from the Lompoc Police Department, the Santa Barbara County District Attorney’s Office, service providers, those in the medical field and others were in the audience.

Phelps said there’s been a stigma in the past, and that she’s introduced as a “former child prostitute,” which not only furthered a stigma but was inaccurate.

Phelps spoke about the trade of prostitution, and that even if a victim of trafficking is 18 years old, “18 doesn’t matter,” she said. “When somebody offers money for your flesh, at that moment, that is a violent act.”

The traffickers or purchasers can look like anyone, she said, and reminded the audience that a pimp working on the low end of trafficking could bring in half a million dollars a year with a handful of victims working each night, but that some traffickers bring in millions annually.

Victims are not going to come running for help, Phelps said, adding that it’s not just one thing that makes children vulnerable to traffickers, but a host of unmet needs, abuse, neglect, abandonment, rejection and other life circumstances.

A trafficker may provide false hopes, false family structure and even provide food and shelter or have children with the victim.

Lower social tolerance and discouraging the buying sex is key to ending human trafficking, Phelps said, and that messages like this should even be included in sex ed curriculum in schools.

“Make it not OK,” she said, adding that conversations should be had with children about the messages in music and media, especially for young girls.

Decreasing the demand for sex with a victim could include suspending the buyer’s driver license or a geographic restraining order against people who are known to be perpetrators.

Phelps also spoke about what victims say they need in order to leave trafficking, and highest on the list are job training, housing and emotional support.

Connecting victims with survivors is also key, so that they know there is hope on the other side.

Phelps reminded the audience that every time someone buys sex, “you’re hurting society,” adding that the cost of that person’s care will take a high toll on that person’s well-being and safety as well as tax social services, law enforcement and the surrounding community.

“Buying somebody, not OK,” she said. “My guess is, with the number of people in the room, we can get that message out.”

Tuesday, April 14 is Equal Pay Day and we will be accepting a Proclamation from the County Board of Supervisors that morning.  We will be wearing red that day.

“Bridges Out of Poverty” Community Trainer

Click the buttons below to learn more about AAUW