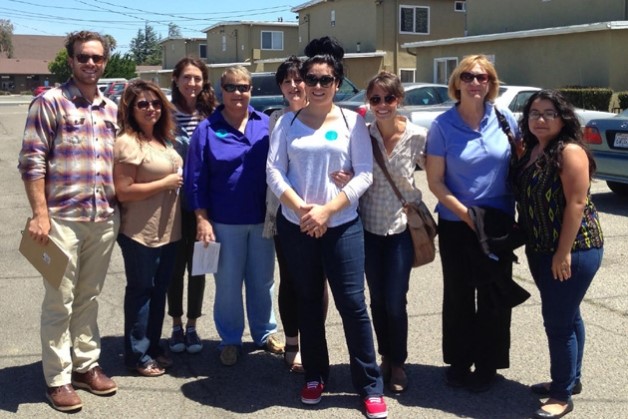 Volunteers spent last Saturday contacting motels and hotels in Lompoc to educate them about how to identify children at risk of trafficking and to urge them to report that activity to law enforcement. (Contributed photo)

Volunteers spent last Saturday contacting motels and hotels in Lompoc to educate them about how to identify children at risk of trafficking and to urge them to report that activity to law enforcement. (Contributed photo)

A small group of volunteers gave up their Saturday morning last week to hit the pavement and approach local motel and hotel staff in Lompoc, sharing tips about how to prevent child sex trafficking, a heinous problem that exists in Santa Barbara County, often taking place with little notice.

The group was coordinated by Kyli Larson, who works for Uffizi Order, a nonprofit that reaches out to marginalized communities in the county. Larson was one of the researchers who recently conducted a needs assessment that looked at domestic child sex trafficking in Santa Barbara County.

She presented her findings to the Human Trafficking Task Force last week, which showed there are at least 45 documented child survivors from between 2012 and 2014 in Santa Barbara County.

They also found 80 suspected child survivors as well as more than 460 children that were identified as at-risk.

“We know there are many more,” she told Noozhawk on Wednesday. “People should know that this is happening in our community.”

Those findings led Larson and her group to begin a pilot project last Saturday, where four teams of volunteers reached out to hotel and motel workers in Lompoc to educate them about how to identify children at risk of trafficking and to encourage them to report that activity to law enforcement.

Hotels and motels are a common place for children to be sexually exploited, a finding Larson said corresponds with national data as well as survivors she has interviewed.

In addition to reaching out to the city’s 13 motels and hotels, the volunteers also went to several apartment complexes and local businesses.

Four officers from the Lompoc Police Department were there to accompany the groups.

Some of the groups were able to talk with hotel and motel managers, others talked with front desk staff.

Some of the signs that could signal that a child is being exploited could include a person paying in cash, a hotel check-in where a child is accompanied by an older man or many people could be seen coming and going out of the same hotel room, Larson said.

“These are signs that are nationally consistent but also apply to our community,” she said.

The response volunteers got from hotel and motel staff was positive, and “each one indicated they would like further information,” she said. “I found it very encouraging.”

The goal is to identify survivors of sex trafficking and connect them to resources, and Saturday’s effort is something Larson hopes to see replicated throughout the county.

The group decided to begin in Lompoc because it was a small location and the police department there had been supportive of the idea and offered to accompany the group as they did the outreach.

“Our hope is that we can organize teams throughout the county to start educating all of the hotels and motels in our county,” she said.